Understanding how these drugs affect thinking processes can go a long way towards riding out the worst of hallucinogen withdrawal symptoms. In cases where addiction becomes a factor, getting professional treatment help will likely be necessary in order to maintain continued abstinence.

Like all psychoactive drugs, hallucinogens interfere with the brain’s normal chemical processes and over time can actually “rewire” chemical pathways in the brain. Withdrawal symptoms develop out of the cumulative effects hallucinogens have on brain chemical functions.

According to the Institute for Substance Abuse Treatment Evaluation, with each drug dose, hallucinogens trigger the release of neurotransmitter chemicals, two of which are glutamate and serotonin among others. Neurotransmitters act as chemical messengers, sending information to various brain regions as well as throughout the central nervous system.

Hallucinogen effects most target the brain’s cognitive functions, some of which include –

Once a person stops using, the brain has to relearn how to regulate bodily process in the absence of the drug’s effects. Until it does, a person will experience hallucinogen withdrawal symptoms.

The chemical imbalances left behind by hallucinogen use will likely leave your thought processes and emotions in a state of disarray after stopping drug use. Keep in mind that the brain is in repair mode so feelings of sadness and anger will only persist for so long.

Chaos and activity characterize drug abuse and addiction. When stopping drug use, try to establish a daily routine. Doing so will help keep your mind off using drugs. 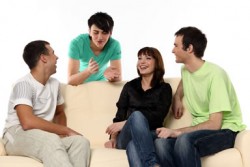 Connecting with others is a great way to overcome withdrawal symptoms.

Drug abuse breeds a lifestyle of its own. Spending time with friends and family (who don’t use drugs) is a good way to back into a normal, drug-free lifestyle.

When using drugs, it’s likely dietary concern were the furthest from your mind. Hallucinogens take a toll on the body’s overall health, so eating a healthy diet during the withdrawal stage can go a long way towards easing the withdrawal process along.

As tempting as it may be to take a “hit,” doing so will only set you back at square one. Over-the-counter remedies, such as ibuprofen and Pepto-Bismol do a good job at helping to ease uncomfortable hallucinogen withdrawal symptoms, such as headaches and gastrointestinal distress.