As one of a handful of “date rape” drugs, ketamine produces hallucinatory effects that leave users physically incapacitated. Commonly used as an anesthetic agent in veterinary practice, ketamine abuse practices started as far back as the 1980s, according to Brown University.

Most popular among today’s teenagers and young adults, regular ongoing ketamine use can impair a person’s ability to manage the affairs of daily life. Ketamine dependence becomes an issue once the brain comes to rely on the drug’s effects to function normally.

More than anything else, ketamine dependence impairs a person’s psychological well-being. After so many months of regular use, the need for drug treatment becomes increasingly apparent as drug-using practices start to disrupt major areas in a person’s daily life. 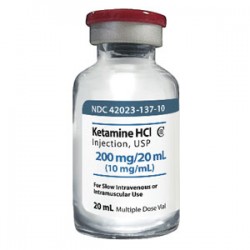 Large doses of Ketamine can lead to the “k-hole” effect.

According to New York University at Steinhardt, high doses of ketamine produces what’s known as the K-Hole effect where the body shuts down while the brain remains conscious and alert. It’s these conditions that give rise to hallucinations. Ketamine dependence develops as brain chemical activity starts to change in response to the drug’s effects.

Much like the hallucinations that characterize psychosis, a one-time dose of ketamine can produce psychosis-like effects, according to Reuters Health. When used on a repeated basis, these effects inevitably alter critical brain processes, including:

Ketamine belongs to the dissociative class of hallucinogen drugs, most characterized by the overall disconnect that occurs between the body and brain. This “disconnect” leaves the brain free to create a reality of its own.

Symptoms of ketamine dependence become increasingly hard to miss as users start to show signs of compromised brain functioning. Frequency of drug use and dosage levels used determines how severe symptoms will be.

Symptoms of ketamine dependence may take the form of:

The Need for Treatment

With frequent ketamine use, the brain comes to require more of the drug to produce the desired “high” effect. The brain’s tolerance for ketamine will continue to increase for as long as a person keeps using it.

As ketamine’s overall effect creates a sense of detachment and dissociation from one’s everyday world, regular users tend to grow more detached from the people and activities that most characterize who they are as individuals. Ultimately, the sooner a person gets help for ketamine dependence the better his or her chances of a full, successful recovery.