As a group, hallucinogens alter a person’s sensory perceptions, which translate into altered states of consciousness. In terms of the different drugs that fall under this classification, each drug produces its own unique effects and withdrawal symptoms based on the areas of the brain most affected. 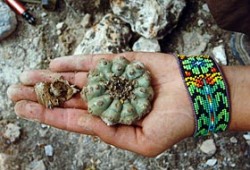 Peyote is a hallucinogenic drug.

According to Bryn Mawr College, the most commonly used hallucinogen drugs include:

Hallucinogens derive from both natural and synthetic ingredients, with most having no known medicinal purposes. Depending on the drug, hallucinogen effects may take the form of:

With such a wide variation in drug effects, hallucinogen withdrawal symptoms can take any number of forms depending on the person, his or her experience with hallucinogen drugs as well as one’s mood when using.

Once hallucinogen withdrawal symptoms take effect, a person may experience:

Hallucinogen effects on brain chemical levels affect a person’s emotional and psychological states, both during and after the “high.” These interactions leave users open to experiencing a range of psychological hallucinogen withdrawal symptoms.

Psychological symptoms can vary in severity and intensity based on the type of drug used. Symptoms may take the form of:

While hallucinogens in general pose a low risk of abuse and addiction compared to other types of drugs, they nonetheless take a toll on the brain’s ability to maintain normal bodily functioning when used on a frequent, ongoing basis. At some point, the brain starts to develop a tolerance to hallucinogen effects, which in turn drives increased drug use.

According to the National Institute on Drug Abuse, long-term hallucinogen use causes widespread brain damage that can linger for years, regardless of whether a person stops using or not. In extreme cases, users can develop a condition known as hallucinogen persisting perception disorder or HPPD.

Under these conditions, the brain is working at a diminished functional capacity, which can greatly impair a person’s ability to cope with everyday life.