LSD is one of the most powerful mood altering substances that is manmade in laboratories throughout America. LSD is made from lysergic acid that derives from the ergot fungus, which is found on grains such as rye.

LSD is illegally made by mixing the ergot fungus with other substances and then hardened and crystalized, it is then liquefied and sold on the streets usually as gelatin squares or tablets. LSD is a hallucinogen that when taken causes a person to completely detach from reality and experience and see things that are not really there.

The experience a person has on LSD is usually referred to as a trip, and when the hallucinogenic experience is scary or unlikable it is referred to as a bad trip. LSD can cause numerous problems to occur in a person who is using the drug, especially since they are not in their normal state of mind, which can cause them to react to their hallucinations violently or cause harm to themselves or to others. 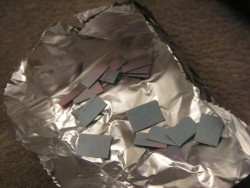 LSD is often found in a tab or gel cube format.

LSD abuse affects the lives of millions of Americans each year and is continuing to be distributed throughout America. According to the Foundation for a Drug-Free World, in 2008 there were over 3 million people in America that reported using LSD.

There are several facts that people who are taking LSD should be aware of. Below is a list of four facts about LSD that people should know.