PCP stands for phencyclidine, which was a drug developed by scientists in the 1950s for its anesthetic properties to help patients. However, the drug was discontinued because patients became violent and began having hallucinations while on the drug. Although the drug was discontinued in the medical field, people began to make and distribute the drug illicitly. The illegal making and selling of PCP still occurs today and the drug is one of the most popular hallucinogenic drugs used. 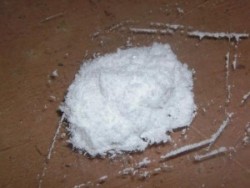 PCP is most often found in a white, powdery format.

When a person takes PCP they will begin to experience hallucinations and they will have a delusion of reality. This may mean that they will see things that are not there, or shapes and sizes of objects will appear different. They may also loose sense of time and self-identity, meaning that they will no longer know who they are or where they are at. A person using PCP can experience bad hallucinations which can cause them to act in ways they never would if they were not under the influence of the drug. This can lead to them harming themselves or becoming violent with other people and not even realizing it.