According to Brown University, “Addiction to hallucinogens is rare, although poly-drug addicts (people who are addicted to several drugs) frequently abuse hallucinogens as well.” LSD is one of several hallucinogens that does not cause drug-seeking behavior at all on its own and is, therefore, considered to be non-addictive. In some instances, though, treatment may be necessary nevertheless.

LSD is not considered to be an addictive drug for several reasons: 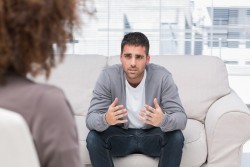 LSD abuse is usually treated through behavioral therapies and medications.

For these reasons, a person who uses LSD specifically will not participate in the kind of behavior that normally leads to addiction, nor does the drug cause the changes in the brain that lead to this issue as well. A person will, normally, not require treatment in order to stop LSD abuse alone; however, this does not mean treatment is completely unnecessary.

How Should LSD Abuse Be Treated?

Because the drug does not cause addiction in a traditional sense, different issues must be addressed when a frequent LSD abuser begins to attend treatment.

The LSD abuse syndrome is treated very differently than those associated with other drugs of abuse, but normally, a person will not become addicted to LSD. However, their physical and mental state must be assessed and any other substance use disorders they are struggling with should also be treated in order for the individual to safely recover from their LSD use. If you have more questions about hallucinogens or want to find a rehab program near you, call 800-592-1193 (Who Answers?) .