First developed in 1938, LSD exists as the most powerful hallucinogenic drug in existence. According to the National Institute on Drug Abuse, LSD contains lysergic acid, a fungus-type substance found in rye and grains.

While hallucinogens as a group encompass a wide range of different drug types, LSD most exemplifies the effects of this drug group. LSD carries a low risk of physical dependence, though the risk of LSD addiction runs considerably higher than most other hallucinogen drugs.

LSD’s low physical dependence potential coupled with its high addiction potential can easily deceive regular users of the drug. This drug produces ongoing effects which alter certain key brain chemical processes in harmful ways. For this reason, LSD addiction treatment places a heavy emphasis on helping addicts overcome the psychological aftereffects of the drug rather than its physical effects.

LSD Effects in the Brain

LSD exerts its greatest effects on the brain’s serotonin system. Serotonin, one of a handful of primary neurotransmitter chemicals, plays a central role in regulating most every central nervous system function, including:

According to Bryn Mawr College, LSD essentially commandeers the body’s central nervous system, which accounts for its ability to produce hallucinations. In addition to LSD’s direct interactions, changes in serotonin levels also work to offset other essential neurotransmitter chemical processes.

In spite of LSD’s low risk for physical dependence, a person can still develop a tolerance for the drug’s effects within a short period of time. In general, the body becomes physically dependent on a drug at the point when withdrawal effects start to develop. LSD doesn’t produce withdrawal effects, but the brain’s chemical system quickly adapts to the drug’s presence. As this happens, users must ingest increasingly larger doses of the drug to experience its “high” effects.

Levels of Treatment for LSD Addiction

More than anything else, LSD addiction develops out of the brain’s growing psychological dependence on the drug. Someone who’s psychologically dependent on LSD comes to rely on the drug’s effects to cope with daily life stressors. 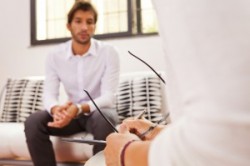 Since LSD produces no discernable withdrawal effects, LSD addiction treatment focuses on treating the psychological aftereffects of the drug. Levels of treatment used include:

In the absence of uncomfortable withdrawal effects, it’s easy to disregard the harmful of effects of LSD on the mind. Once the effects of the drug start to interfere with a person’s ability to manage the affairs of daily life, it’s time to consider getting needed treatment help.