The effects of LSD usually last for 6 to 12 hours, causing a rather longer duration of effectiveness than most drugs. However, the effects will usually leave your system in 12 hours—at the most—after you use the drug, and you will not show signs of having used the drug after about a day. If you are looking for more information on hallucinogens and their effects or need treatment for hallucinogen abuse, call 800-592-1193 (Who Answers?) now.

The Effects of LSD and Their Duration

According to the Center for Substance Abuse Research, “Users feel the effects of LSD within 30 to 90 minutes after ingestion, and these effects may last as long as 12 hours.” The first hour after ingesting the drug usually brings visual changes and mood swings for the individual. Over time, they will begin to experience hallucinations of colors, sounds, feelings, and altered perceptions of their own image as well as people and things around them. These effects can be dangerous––especially if an individual is not in a safe environment or with people they can trust––and they often last much longer than first-time users realize.

The physical effects of LSD over this 12-hour period may include: 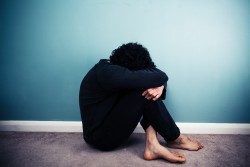 It isn’t uncommon to experience anxiety and depression after an LSD trip.

Will LSD Linger in Your System?

Because the effects of the drug last for such a long time, LSD itself usually leaves one’s system quickly after the effects begin to wane. This means the drug does not linger in a person’s system like some substances do, and after roughly 24 to 36 hours, it should be completely gone. However, it is important to be aware of the dangers of abusing LSD, even though the drug will leave your system fairly quickly.

There are many ways the drug can cause harmful effects even though it does not stay in your system for long. The effects of the substance can create psychological problems for the user that linger even if the drug itself doesn’t. As stated by the Drug Enforcement Administration, “It is possible for users to suffer acute anxiety and depression after an LSD ‘trip,’ and flashbacks have been reported days, and even months, after taking the last dose.”

LSD abuse can also cause a person to behave bizarrely, putting themselves and others in danger. Suicidal and homicidal thoughts and actions, violent behavior, and accidental fatalities have all occurred as a result of LSD abuse. The drug itself is hazardous, and even if it is not technically in your system anymore, it can still affect you.

Why LSD Abuse is Dangerous & When to Get Treatment Help

While not considered an addictive drug, LSD can still cause many issues for those who abuse it, and professional treatment may be necessary in certain cases. If you believe you need help for LSD abuse, call 800-592-1193 (Who Answers?) now. We will help you find a rehab center in your area and discuss the best treatment options available.