LSD is one of the most powerful of hallucinogenic type drugs. Distorting a user’s perception of reality to the point that they may not be able to distinguish what is real or what is not. These experiences, referred to as bad trips can be very unpleasant to the user. While not everyone that takes LSD will have the same reactions, the drug is highly unpredictable. This makes it impossible for users to know in advance if they will have a good or bad trip. Symptoms of LSD abuse may vary by user, but the risks can be dangerous.

According to the National Drug Intelligence Center, some LSD users experience a feeling of despair, while others report terrifying fears–of losing control, going insane, or dying. Some users have suffered fatal accidents while under the influence of LSD. 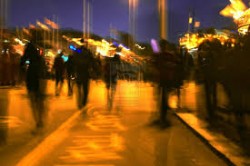 LSD can cause blurred vision and distorted senses.

If you or someone you love uses LSD, then it is important that you become aware of the symptoms that can arise when the drug is misused, as it can have negative effects on a person’s overall health. While LSD is not considered an highly addictive drug, those that use it can build tolerance quickly and will need more of it to attain the same desired effects as they had before. The result of it can lead to abusing the drug. Some of the symptoms of LSD abuse include:

The symptoms may vary from one user to the next. You may not experience the same symptoms, but you may experience many of these or other symptoms not listed here. The more LSD is used, the more probable the chance for abuse is, and the more unpleasant the symptoms can become.

According to the National Institute on Drug Abuse, impulsiveness and rapid emotional shifts that can range from fear to euphoria, with transitions so rapid that the user may seem to experience several emotions simultaneously.

Additional Signs of LSD Use

Many unpleasant symptoms from using LSD can be experienced by users, and can be quite uncomfortable including:

Other symptoms may not be listed here. However, LSD abuse can lead to becoming psychologically dependent on the drug. LSD is highly unpredictable and a bad trip can end up with an emergency room visit. There is also the chances of using LSD that has been mixed with some other harmful substance. Not only can LSD abuse lead to a person experiencing severe panic attacks, but it can also lead to possible death.

While treatment for LSD is different from other drugs, because it is not considered physically addictive. The person treated needs great care to help them remain calm and stress free. It can also involve some forms of psychotherapies to help those that are having flashbacks. More intense treatment methods can be available for those that have a mental illness and suffered psychosis.

If you or a love one are concerned with the symptoms of LSD abuse listed here and feel you may need help in stopping the use of LSD, then contact a substance abuse specialist as soon as possible. They can help guide you and find a facility where you can learn to quit safely, and return back to living a healthier lifestyle without the use of drugs.