LSD, the most popular of hallucinogen drugs, is well known for its ability to take users on seemingly incredible journeys inside the mind. The experience of visions, enhanced sensory perception and hallucinations most distinguishes this class of drugs from all the others.

As one of the most powerful hallucinogen agents on the market, just a small dose of 50 to 300 micrograms can alter a person’s sense of reality for up to 10 hours at a time. Amazingly, LSD and drugs like it carry a considerably lower addiction potential than opiates and stimulants, though users can still develop LSD tolerance over time.

Once LSD tolerance forms, the drug loses its powerful effects, tempting users to increase their dosage amounts. LSD tolerance may also be a sign of physical dependency, which can soon turn into addiction with continued drug use. Knowing what to do when an LSD tolerance develops can go a long way towards avoiding some of the more unpleasant effects of the drug.

LSD Tolerance and the Brain 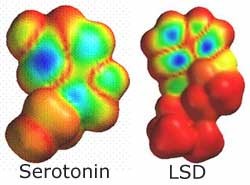 LSD, also known as lysergic acid diethylamide, is derived from the fungus ergot, which grows on rye as well as other types of grains. When ingested, the body quickly absorbs LSD from the stomach and intestines with drug effects setting in within 30 to 40 minutes.

LSD closely resembles serotonin, an essential brain neurotransmitter chemical, in structure. This similarity accounts for why the brain assimilates LSD’s effects so easily.

With regular or frequent LSD use, the brain cuts back on its own production of serotonin, according to Bryn Mawr College. When this happens, LSDs effects lose their intensity since there’s less serotonin available. At this point, tolerance levels will continue to rise for as long as a person keeps using the drug.

Considering the intense effects brought on by an LSD “trip,” the brain releases incredibly high levels of serotonin (and other chemicals) each time a person uses. Consequently, LSD tolerance can form rather quickly, especially when used on a frequent basis.

As a group, hallucinogen drugs interact with many of the same areas within the brain. Other hallucinogens like mescaline and psilocybin act on the same serotonin brain receptors as LSD.

According to George Mason University, these similarities breed a cross-tolerance. This means, users will need to abstain from other forms of hallucinogen use as well or else the brain’s tolerance for LSD may actually increase.

While it may be tempting to just increase the dosage level and override LSD tolerance effects, doing so can takes user down a dangerous path to addiction. Addiction takes root once a person develops a psychological dependency on LSD’s effects.

Once a psychological dependency forms, a person’s confidence, motivations and drive become wrapped up in the drug’s effects. It’s at this point where the drug starts to take over a person’s life.