According to the University of Maryland, peyote exists as the oldest known psychedelic agent, first used by Aztecs of Pre-Columbian Mexico as part of their religious ceremonies. Today, people use peyote to experience the hallucinogenic effects of the drug. 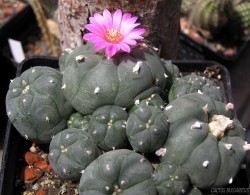 Peyote side effects are often unpredictable.

Unlike other types of hallucinogens, the presence of mescaline makes for a combined stimulant-hallucinogenic experience when using peyote. Likewise, peyote side effects can differ from other hallucinogens like LSD and mushrooms.

Peyote side effects range from adverse physical reactions to distressing psychological effects. Hallucinogens, in general, are known for their unpredictable effects no matter how long a person has used the drug. Peyote side effects follow suit in terms of the types of experiences users can have.

Peyote’s mescaline component has a similar chemical structure to the dopamine and norepinephrine, two primary neurotransmitter chemicals in the brain. This similarity enables peyote to interfere with essential brain chemical processes.

According to the National Institute on Drug Abuse, physical peyote side effects result from the drug’s effects on the central nervous system. Side effects experienced include:

The severity of side effects experienced reflects the degree of interference peyote has on overall brain function.

Peyote’s ability to distort the mind’s perception of reality is its most sought after effect for regular users. During a peyote high, users can see and hear things that aren’t real. According to Columbia Health, a high experience can last for up to 12 hours with peak experiences occurring at the four-hour mark.

To an observer, psychological side effects may appear strange and even frightening as users interact with figments of their imagination. As with most any hallucinogenic drug, users can have “bad trips” as well as “good trips” at any given time. The type of trip experienced plays into the types of side effects a person has.

Psychological peyote side effects include:

Hallucinogens, in general, carry a fairly low risk of abuse and addiction compared to other types of drugs. However, frequent use of peyote can increase the risk for addiction. In effect, exposing the brain to peyote’s side effects on a regular basis predisposes a person to dependency.