Peyote, used mostly in religious ceremonies by natives in Mexico and the southwestern United States, has not caused them any negative effects when using it. However, those that abuse the use of peyote outside of religious rituals may experience hallucinogenic effects similar to those of LSD. Some of the peyote effects may be harmful if taken in large doses, and for prolonged periods of time.

According to the National Institute on Drug Abuse, its effects can be similar to those of LSD, including increased body temperature and heart rate, uncoordinated movements (ataxia), profound sweating, and flushing.

What are Some Known Harmful Peyote Effects?

Although it is illegal to buy, sell, or grow peyote in the U.S., it has been used for nondrug purposes within certain religious groups. According to the Center for Substance Abuse Research, peyote is a schedule I hallucinogenic drug under the controlled substance act in the United States, in a rare exception, “the nondrug use of peyote in bona fide religious ceremonies of the Native American Church, and by members of the Native American Church” is legal.

Some of the effects of peyote that may be considered harmful and/or unpleasant include the following: 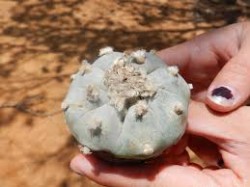 Peyote looks like a harmless plant but its effects are very powerful.

The effects of peyote can differ from one individual to another. Some may never experience any of the effects listed here, others may have experienced some that are not listed at all. Like other hallucinogenic type drugs, the peyote effects can vary due to several factors, including the amount taken, the repeated use, the age of the person, their general mental state of mind, with who they are with, and their surroundings.

Other Reported Effects of Peyote

Some other effects of peyote are psychological. Pro-longed use can cause short-term memory loss, and it can also cause the following side effects:

Much of the potential harmful effects of peyote is from overdosing. If a person takes large doses of peyote, it can lead to extreme anxiety that can last for up to 2 days, and in the worst cases a user that experiences severe hallucinations may cause harm themselves, and can end up being hospitalized.

Also, using peyote while driving or operating heavy machinery can be potentially-life threatening. While some users have used peyote in low doses and report no serious side effects, those that abuse it usually buy it illegally. When bought in the streets it can contain other substances that can be very harmful to a user.

Although peyote is not considered addictive, when it is abused and used repeatedly -can become habit forming. With the unpredictable effects that many hallucinogens cause, users should contact a treatment center to help them end their psychological dependence on the drug. Avoid the potential harm of peyote effects and talk to a substance abuse specialist as soon as possible.