According to the University of Wisconsin La Crosse, peyote has long history of use, extending as far back as 20,000 years. Peyote is a small spineless cactus that grows in parts of Mexico and Texas. It contains the psychoactive chemical mescaline, which is a hallucinogenic psychedelic. The peyote cactus uses mescaline instead of spines for self-defense. Animals that ingest mescaline suffer very unpleasant side effects, and learn not to eat the cactus. This same psychoactive chemical has made peyote a drug of abuse since the mid-1900s. In order to fully understand why people use peyote, there are a few things to know.

Peyote use began amongst the native tribes of southern North America. Despite the fact that the peyote cactus only grew naturally in a small area, there is evidence that tribes as far away as 1,000 miles used peyote. Today, the only group legally allowed to use peyote is the Native American Church. 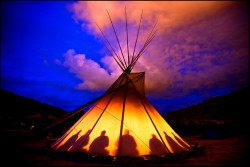 The Native American Church can use peyote legally.

Much like their native ancestors, the Native American Church uses peyote for a number of reasons. According to the Center for Substance Abuse Research at the University of Maryland, these reasons include:

For these reasons, the United States government granted the church special exemptions for the growth, possession, and consumption of peyote in order to preserve their native culture.

Anyone that is not a member of the Native American Church, and uses peyote, is doing so illegally. Peyote is classed as a Schedule I controlled substance under the Controlled Substances Act, meaning it has a high potential for abuse and no recognized medicinal value.

People that use peyote in an illegal manner do so for very similar reasons as do members of the Native American Church. Some of these reasons include:

In today’s high stress world, these things can be very appealing to someone that is looking to get away from it all, if even just briefly. If you also consider the fact that peyote is a natural substance, and thus misconceived as safe, it is no surprise that it is a drug of abuse.

What Are The Dangers of Using Peyote?

According to the Partnership for Drug-Free Kids, there are a number of dangerous side effects involved with peyote use. These include:

This does not include the possible side effects of a “bad trip”, which may include paranoia, anxiety, or even suicide. While there are many reasons that people use peyote, both legally, and illegally, there is a reason that it is considered a dangerous drug of abuse. For more information on the reasons why people use peyote, call us at 800-592-1193 (Who Answers?) .