Certain mushrooms contain psychoactive chemicals that cause hallucinations or distortions in perception, visual, or auditory senses. The most common magic mushrooms are those containing psilocybin and psilocin and are found in Southwest America and Mexico. There are about 40 species of these types of mushrooms which have been used for centuries in medicines, healing ceremonies, and spiritual rituals. Magic mushrooms were used in psychotherapy research until they were banned under the Controlled Substances Act and now, they are widely abused for their psychedelic effects.

Magic Mushrooms are not considered physically addictive but some psychological influences may contribute to repeat abuse. “For several days following the use of mushrooms, users may experience a period of psychological withdrawal and have difficulty discerning reality.” according to The Center for Substance Abuse Research. Individuals prone to using psychedelic drugs often have co-existing mental health or poly substance abuse disorders and they are often influenced by their peers or environmental stresses.

Tolerance to psilocybin can develop quickly and peaks after frequent use in short term intervals where the results are then, weakened. Increased dosages will lead to serious adverse effects and the person will be unable to achieve the desired results until they abstain from using hallucinogens for a while.

Magic mushrooms can be unpredictable and the effects can be influenced by the “setting” including the person’s state of mind, surrounding, lighting, sounds, and a variety of other stimuli. People often abuse them with friends or in happy settings but, the results are difficult to replicate because in addition to the various conditions involved with each setting, there are also varying potencies and changes in expectations. So, every experience of using magic mushrooms is ultimately, different from the last. 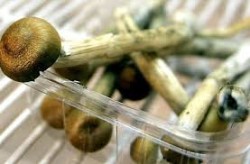 Despite their dangerous and harmful effects, psilocybin is not considered to be addictive.

The primary effects of magic mushrooms are:

The early psychosis effects may last from 4 -6 hours, but, in high dosages, other adverse side effects are possible. These side effects can be dangerous and may include:

Psychedelic drugs have been linked to cognitive impairments, memory loss, or ongoing psychological difficulties that can last for weeks and the ability to make appropriate judgments regarding continued drug use becomes more difficult.