What are Magic Mushrooms?

Magic mushrooms are specific types of mushrooms that contain chemicals in them that will cause a person to experience hallucinations. Magic mushrooms are commonly abused by millions of Americans, and many times they are abused for spiritual experiences, or so that the user can experience distortion from reality. However, the effects of the drugs cannot be stopped once a person starts, and sometimes people have terrible experiences while on the drugs. When this happens it can cause a person to become violent and dangerous to themselves and to others.

Although most people take magic mushrooms to have an out-of-body or spiritual experience, sometimes people experience a ‘bad trip,’ which is where a person has scary hallucinations and a horrible experience while on the drug. 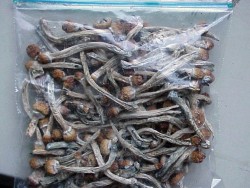 According to the Center for Substance Abuse Treatment, a person high on mushrooms can experience extreme tension, anxiety and restlessness and have highly adverse reactions to the drug. Some symptoms of a bad trip include frightening hallucinations, confusion, disorientation, paranoia, agitation, depression, panic, and terror.

Magic Mushroom Effects on the Brain

There are numerous types of effects that magic mushrooms can have on a person’s mentality. Since magic mushrooms significantly impair a person’s brain chemicals, the effects of the drugs will vary from person to person, because every person is unique in their way of thinking and the way they view things.

According to the Center for Substance Abuse Treatment, psychological effects of magic mushrooms include, heightened sensory experiences and perceptual distortions, auditory, and visual hallucinations, melding of the senses, difficulty focusing, impaired judgment, sense of detachment from body, altered perception of space and time, inability to distinguish fantasy from reality, and melding of past experiences with present.

The type of hallucinations a person will hear or see, or the impact the drug will have on a user’s body cannot be determined, and this makes the effects of magic mushrooms dangerous and sometimes fatal. If a person experiences bad hallucinations while on the drug they may react violently, and they may not even realize what they are doing. In addition, a person is more likely to engage in dangerous activities while on the drugs, since their reality will be completely distorted. Magic mushrooms can also be poisonous to a user resulting in them vomiting or having an allergic reaction to the drug. In addition, after a person has finished a ‘trip’ on magic mushrooms, their brain chemicals will be impaired, which can result in them feeling extremely sad, fatigue, and irritable. It may take days for their brain chemicals to return to normal, and this can have a negative impact on their life and daily responsibilities.