Psilocybin is a naturally occurring hallucinogenic compound found in certain types of mushrooms, according to the DEA. They have a long established history of usage in religious rituals for centuries, but recreational usage of “magic mushrooms” has become increasingly popular in recent decades.

In looking at treatment options for psilocybin addiction and usage, there are a few things that should be kept in mind.

Mushrooms are Not Chemically Addictive

While addiction often forms as a result of a physical dependence on a substance due to its chemical structure, psilocybin lacks any chemical capabilities of being physically addictive. Many users become addicted to magic mushrooms on a psychological level, rather than a physical one.

When seeking treatment for psilocybin addiction, it is best to keep in mind that there will likely be little attention paid to the bodily effects of the drug in favor of the mental effects.

Mushrooms Can Be Well Hidden

As psilocybin is naturally occurring in over 200 species of mushroom, it can be very easy to hide magic mushroom usage under innocent means. The wide variety of psilocybin mushrooms have made it possible for instances of accidental consumption, where people have eaten the mushrooms unaware of their hallucinogenic properties.

These mushrooms can grow untended nearly everywhere and can even be found in innocuous places like parks, gardens, and yards without ever being intentionally planted there. As they can only be orally ingested, they can easily be added to other foods or brewed in teas. 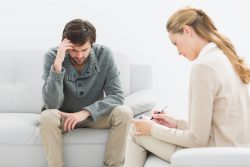 Behavioral therapy is currently the most effective treatment for magic mushroom addiction.

There Are No Government-Approved Medications For Treatment

Unlike most substance abuse treatment programs, treatment for someone who has abused mushrooms will most likely not include any medication treatment. The effects of psilocybin often fade when the mushroom leaves the body, there is usually little reason to implement a medication regiment to reverse the symptoms. If you have questions about the symptoms of shroom use, please call 800-592-1193 (Who Answers?) .

In cases were medication may be necessary, there is a substantial risk of the medication being more addictive than the mushrooms. Most likely, the treatment plan will be behavioral based, using therapy and counseling to help users overcome any psychological remnants of addiction. There isn’t a standardized treatment format for psilocybin abuse as more research for effective treatment is still being conducted.

There Are Two Main Long-Term Effects

Most drugs have a long list of side effects from usage, both short- and long-term. As most hallucinogens like psilocybin lose their effect after 6-12 hours, the list is a bit shorter for magic mushrooms. The NIDA lists only two established long-term side effects of hallucinogens: persistent psychosis and flashbacks.

This is usually a result of long-term usage and associated chemical changes in the brain. Flashbacks are often of previous drug experiences and can occur without warning. Persistent psychosis, including instances of mood changes, paranoia, visual disturbances, and disorganized thinking have been known to continue long after psilocybin usage.

These symptoms are occasionally misidentified as signs of another disorder such as a brain tumor or stroke, so it is best to address all possibilities during treatment if these signs occur.

If you or a loved one is struggling with an addiction, please know that help is out there. Call 800-592-1193 (Who Answers?) for the opportunity to speak with one of our caring specialists and to learn about what treatment options are available for you.

Effects of Mushrooms on Your Health