Hallucinogens offer the recreational drug user a different type of “high” than most other forms of drug use. As the name implies, hallucinogens produce hallucinations of all sorts, from visual to auditory to tactile imaginings that can be exhilarating or horrifying.

According to the University of Northern Colorado, hallucinogens work by stimulating neurotransmitter production in the brain. The different types of hallucinogen drugs produce varied effects based on the areas of the brain most affected.

In general, the various types of hallucinogens fall in three separate categories: 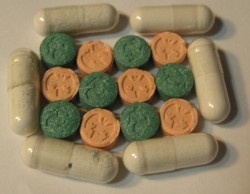 Hallucinogens can be found in a few different forms.

The varied effects produced by different types of hallucinogens results from how any one drug interacts with the brain’s chemical processes.

Deliriant hallucinogen drugs alter a person’s sensory perceptions to the point where the mind concocts imaginary scenes that have no basis in his or her external reality. Consequently, someone experiencing a Deliriant-type “high” enters a stupor-like state of total confusion.

According to Bryn Mawr College, the total “unreality” of users’ perceptions sees them talking to people who aren’t there or performing tasks completely out of context with the surrounding environment. Commonly used deliriant hallucinogens include:

Dissociative types of hallucinogens essentially sever a person’s consciousness from his or her immediate environment. In effect, dissociative drug effects allow the mind to create its own reality in terms of sensory perceptions and emotional experiences.

Psychedelic drugs interrupt the brain’s ability to filter out extraneous sensory details from the immediate environment. This particular ability enables a person to function effectively in the “real” world.

Psychedelic drug effects allow the brain to transmit any and all sensory perceptions. As a result, users experience an enhanced version of any surrounding smells, colors, textures and sounds. Users may also see visions and hear voices.

Hallucinogen effects tend to be highly unpredictable regardless of the type of hallucinogen used. These drugs can produce what’s known as “good trips” or “bad trips” at any given time.

On average, a drug “trip” can run anywhere from five to 12 hours depending on the dosage amount ingested. While the type of hallucinogen used does affect the types of experiences had, a person’s mood, expectations and surrounding environment most influence what type of trip he or she will have.