As of 2012, an estimated 180,000 Americans, ages 12 and above, reported using LSD, according to the National Institute on Drug Abuse. Yet another 32,000 reported using PCP. LSD and PCP are only two types of hallucinogen drugs, with newer and more powerful synthetic forms entering the market every year.

Just a few of the hallucinogens in use today include:

Compared to other commonly abused drugs, hallucinogens produce unique and unusual effects that tend to attract certain types of people more than others. While not as addictive as other drugs, certain trends in hallucinogen abuse reflect heavy usage among certain age groups more so than others.

For the most part, people who tend to engage in hallucinogen abuse crave the “high” experience in different ways and for different reasons than opiate and amphetamine users do. These differences account for why hallucinogen abuse rates have remained considerably lower than most other types of drugs.

Hallucinogens exist as both plants and as synthetically made substances. Known for their hallucinatory effects, this class of drugs interferes with a number of brain chemical processes.

When ingested, users may experience any number of effects from hallucinogens, some of which include –

These effects result from the effects of hallucinogens on brain neurotransmitter chemical levels. A single drug dose can trigger the release of large amounts of neurotransmitter types, three of which are serotonin, dopamine and glutamate. Hallucinogen abuse practices can eventually disrupt normal chemical processes leaving the brain in a diminished state. 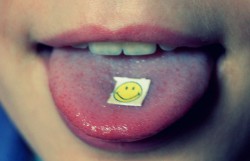 LSD is a commonly used hallucinogen.

Classic hallucinogens alter a person’s perceptions, which accounts for their strong hallucinatory effects. Dissociative drug types produce more of a variety of effects, such as feeling one’s body changing shape or feeling as if time is moving extremely slow.

Hallucinogen abuse effects can vary depending on the type of drug a person uses, as each type alters brain neurotransmitter levels in different ways. Ultimately, people who engage in hallucinogen abuse take a considerable risk as these drugs can be unpredictable in their effects.

Historically speaking, hallucinogen use provided a means for inciting visions and gaining insight into the workings of the spirit world. Indigenous tribes based much of their culture on religious “messages” obtained through the hallucinatory states brought on by these drugs.

The unique effects produced by these drugs have also been investigated as potential treatments for certain psychological disorders, some of which include:

As hallucinogens work by altering brain chemical levels, people affected by psychological dysfunction may benefit from the effects of these drugs on brain function.

According to Emory University, ecstasy, one of the more commonly used dissociative drugs, has become especially popular among young adults, ages 18 to 35. Hallucinogen abuse among young people opens this group up to some unwanted consequences, namely casual sex and unexpected pregnancies.

Also known as one of the many “party” drugs, ecstasy produces both stimulant and hallucinatory effects with users experiencing:

Ecstasy’s hallucinatory effects produce mostly visual and auditory hallucinations while the drug’s stimulant properties create a tremendous increase in energy levels. Over time, this form of hallucination abuse can pose a serious threat to a person’s psychological health.

Most hallucinogen drugs have no known medicinal purpose, which places them on the list of illegal controlled substances. On the other hand, DXM exists as an over-the-counter cough suppressant, which can produce hallucinatory effects when taken in excess amounts, according to the Drug Abuse Warning Network.

This widespread availability of DXM has made it easy for teenagers to engage in hallucinogen abuse practices. As of 2004, teenagers account for an estimated 51 percent of emergency room visits resulting from DXM abuse. Of this number, 41 percent were found to have engaged in both DXM and alcohol abuse.

On average, for every 100,000 teenagers, 14.7 visits to the emergency room result from DXM abuse. Considering the overall rate of emergency room visits for teenagers is 5.7 out of 100,000, DXM use has grown considerably within this population group.

Hallucinogen use, in general, comes with a number of risks regardless of how often a person uses. Several factors can influence what type of “high” a person will experience with each successive use. These factors include –

In effect, users may experience “good trips” made up of pleasant and exhilarating experiences or “bad trips” that are dismal and terrifying. For someone who uses on a regular basis, the intensity of the “trip” will likely increase the longer he or she keeps using the drug.

Hallucinogen abuse also carries a risk of addiction when a person uses on a frequent basis over the course of months or years. More oftentimes not, considerable brain damage results when addiction becomes an issue.