As stated by the National Institute on Drug Abuse, “There is no established treatment for Hallucinogen Persisting Perception Disorder (or HPPD), in which flashbacks may occur spontaneously and repeatedly although less intensely than their initial occurrence.” This disorder is still very alarming and upsetting for individuals, which is why several options do exist for clinicians who have patients with HPPD, even if these treatments have not been officially approved for this particular use.

The Prevalence of HPPD

For a long time, HPPD was considered to be a very rare condition that only few individuals encountered as the result of hallucinogen abuse. Over time, we have found that the condition is much more prevalent than previously believed and that it is likely to occur in addition to persistent psychosis, a disorder caused by hallucinogen abuse that creates visual disturbances, disorganized thinking, paranoia, and mood disturbances.

It was also believed that HPPD only occurred in individuals who already had some sort of mental disorder, but, unfortunately, it has since been established that it “can happen to anyone, even after a single exposure.” The symptoms too are often mistaken for those of neurological disorders like stroke or brain tumors, as “the flashback experience may include visual disturbances such as halos or trails attached to moving objects or seeing false motions in the peripheral vision” (Center for Substance Abuse Research). However, when the true issue is discovered, the treatment may vary from person to person. 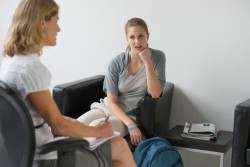 HPPD can be treated with antidepressants and psychotherapy.

Antidepressant medications can be helpful in certain cases as they can improve the mood of the individual over time. In addition, antipsychotics are sometimes prescribed to help control psychotic symptoms that often go hand-in-hand with HPPD. It is important that these medications are only taken under the prescription of a doctor and that the individual who takes them does so only in the doses prescribed.

Psychotherapy is often used, as it can help patients cope with the fear they experience when awaiting another flashback or while experiencing one. With this treatment, individuals can learn to retrain themselves to behave in a way that is safer and more beneficial to their health, therefore taking some of the power away from these uncontrollable flashbacks.

Certain holistic treatments, like mindfulness meditation and yoga, can help individuals learn to control their thoughts more easily as well as their emotions. These practices, as well as others like animal therapy, can also work toward calming the individual, and relaxation techniques can be employed when necessary.

Coping with Flashbacks at Home

Once you learn the techniques professional treatment can teach you, there are other ways to minimize these flashbacks when at home.

Though there are treatment options for HPPD, the condition can take a long time to subside. By staying calm and seeking medical attention, though, you can reduce the hold this disorder has on your life. If you would like to learn more, contact us at 800-592-1193 (Who Answers?) .