There are hundreds of hallucinogens in the world. The word hallucinogen means that a drug or substance produces hallucinations. According to the National Institute on Drug Abuse, many hallucinogens are natural or contain natural compounds the resemble neurotransmitters in the brain. These compounds produce vivid extrasensory experiences and wild visual, tactile, and auditory sensations. Many people use hallucinogens for both legal and illegal purposes.

Many ancient cultures believed that hallucinogens caused the awakening of spirits and a connection between the mind and the world around it. They equated these drugs with spiritual awakening and religion. In many cultures, hallucinogens are still in use today for this purpose. Many of the cultures that use them are tribal in nature. These drugs are strictly controlled by:

These tribal people live in the United States, South and Central America, Africa, and in parts of the Far East.

There are ancient hallucinogens that medicine men used to diagnose and treat illnesses of the brain. Psychologists and psychiatrists practiced with hallucinogenic and psychedelic drugs up until the early 1970s. Drugs like MDMA and LSD were experimented with to help with

In the 1970s, because of the hippie culture the United States government made these medicines illegal. In the 1990s, the government lifted the ban on many of them and several studies are now being undertaken to find out if some of them can help with these very same conditions. 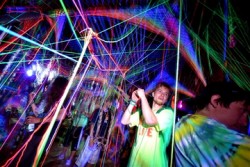 Hallucinogens are often taken at raves.

When used recreationally these drugs become dangerous because the dosage is difficult to control. Manufacturers and dealers of these recreational hallucinogens produce these in cut rate labs rather than pick them from nature or produce them in clean controlled conditions. Many are mixed with other substances such as:

These substances make the hallucinogens potentially dangerous and more likely than not poisonous to the mind and body.

These drugs are then sold to high school and college age kids, who use them at:

Although there are other age groups that use hallucinogens recreationally, most are between the ages of 15 and 29. According to the National Institute on Drug Abuse, around 1.1 million people 12 and older have tried at least one of the hallucinogens within the past 12 months. It is important to remember that many people who are surveyed do not admit to drug use so there may be more people who use hallucinogens on a more regular basis.

For more information on the populations that use hallucinogens or if you find you or someone you love has a problem with them call use at 800-592-1193 (Who Answers?) .