Hallucinogens encompass a wide and varied group of drugs best known for their ability to alter sensory perception, consciousness and mood states. In general, hallucinogens can be broken up into three categories, dissociatives, psychedelics and deliriants, each of which produces certain pronounced effects.

Hallucinogen dependence, while less common than opiate and stimulant dependencies, develops out of long-term and/or frequent drug use. Treatment for hallucinogen dependence follows many of the same practices used in other forms of drug abuse though treatment programs place an especially heavy emphasis on treating the psychological aftereffects of the drug.

The Root of Hallucinogen Dependence

Deliriants, dissociative and psychedelic hallucinogens are so named based on the effects they produce:

While the effects may vary, all hallucinogens interfere with serotonin production in the brain. Serotonin, a primary neurotransmitter chemical, enables nerve signal transmissions throughout the brain and central nervous system and plays a central role in regulating feelings of well-being.

According to the National Institute on Drug Abuse, hallucinogens block the brain’s ability to recycle serotonin, which allows excess amounts of the chemical to circulate. When this happens, users experience distorted sensory perceptions and marked changes in mood state.

With frequent hallucinogen use, these effects leave an imprint in terms of altering normal serotonin activity in the brain. Hallucinogen dependence takes hold once brain chemical process come to depend on the drug’s effects to produce needed serotonin supplies. 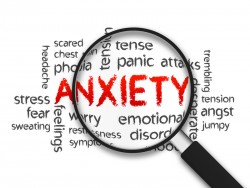 A common symptom of hallucinogen dependence is anxiety.

Once the brain comes to rely on hallucinogens to help maintain normal bodily functioning, serotonin levels have reached an unbalanced state. This state of imbalance leaves the brain unable to regulate bodily processes normally, in which case symptoms of hallucinogen dependence start to develop, some of which include:

Hallucinogen dependence exerts its greatest toll on a person’s psychological well-being, so treatment efforts focus on helping addicts work through the psychological dysfunction left behind. While each person’s treatment needed differ, the overall objectives of treatment include:

As hallucinogens oftentimes produce unpredictable effects in the body, people entering treatment may experience the more distressing aftereffects of the drug during detox, such as:

Under these conditions, the initial detox treatment stage focuses on stabilizing a person’s symptoms, according to the U. S. National Library of Medicine. In cases of severe withdrawal, medication treatments will likely be necessary.

Ongoing drug abuse opens users up to a lifestyle where getting and using drugs become top priorities. During the course of drug abuse, the brain forms certain associations with different environments, activities and people, which in turn become drug-using triggers once a person enters recovery.

For this reason, behavioral treatments for hallucinogen dependence run the gamut in terms of addressing the aftereffects of drug use from different angles. Treatment interventions commonly used include:

Ultimately, recovering from hallucinogen dependence entails an ongoing process of growth and change that can take months or even years in cases of long-term drug use.