Peyote is a psychoactive alkaloid that comes from a small cactus that grows wildly in the Chihuahuan Desert. The cactus can be found in areas of Texas and Mexico and is common among scrub where there is limestone settlement. This plant, particularly the mescaline within the plant, can produce a wide range of effects including deep insight into one’s spiritual side. Auditory and visual hallucinations are also common with the use of Peyote.

There are a number of different species of the cactus responsible for producing mescaline. Peyote often grows in groups of cactuses the form close to the ground. The plants may be blue, green, yellow or a combination of reds and greens. Yellowish or whitish hairs, not spines, are often seen growing on the outer pieces of the cactus. The spineless nature of the Peyote cactus is one of the reasons why this cactus originally was consumed by natives in tribal areas centuries ago.

Each of the Peyote cactus’ disc shaped “buttons” connects to form a rose-like look. These buttons are harvested and dried for later use. When Peyote is consumed, either chewed or boiled down to make a tea, it will produce euphoric, psychoactive effects. The bitterness of the plant often causes the user to first feel nauseous prior to feeling the onset of the psychoactive effects of the drug.

How Peyote is Abused 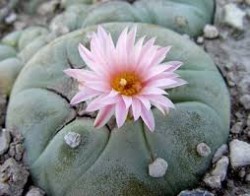 Peyote is a type of hallucinogenic cactus.

Common use of Peyote, or mescaline which is derived from peyote, consists of chewing on the plant or boiling it to create a reduction that can be drank as a tea. The consumption of 10-20 grams of dried peyote buttons will produce a wide range of effects including hallucinations, metaphysical insight or spiritual introspection. Since ancient times, tribes in the Mexico region have been chewing on Peyote buttons to induce a sense of anesthetic or pain relief qualities.

Various effects can arise when a user takes Peyote. The major downfall to this drug, like other hallucinogens, is that when taken there is no sure fire way to know how the drug will affect the user or what types of side effects may arise. According to the National Institute on Drug Abuse, some feel only deep meditation like symptoms while others may suffer intense anxiety or hallucinations that could pose serious risks in terms of the behavioral outcomes of the user.

Long term use of Peyote has not been found to cause any serious side effects but very few studies have been performed to truly narrow down the exact effects of Peyote on a user who takes the drug for an extended period of time. This is mostly due to the fact that the majority of people who abuse hallucinogens do not become addicted and do not continue to abuse the drugs for extended time periods. Most people who abuse hallucinogens such as Peyote eventually stop their drug abuse and require little or no professional treatment.

Studies conclude that there is no real danger of addiction when a user takes peyote. While most hallucinogens are not addictive, this does not make them safe or the use of such justifiable. There are a number of potential dangers that may arise when peyote is being abused. Sustained use of the drug may not lead to addiction, but it could cause adverse reactions in terms of health based on poor eating habits, poor sleep habits or ritualistic behaviors which may interfere with regular day-to-day routines.

While using Peyote may not be addictive, consumption of this drug can cause the user to react in abnormal ways and may lead to behavioral changes that pose serious risks to both the user and to individual members of society. Users who take the drug an experience a “bad trip” or otherwise uncomfortable or unsettling high may be more prone to lash out, to react in an irrational manner, to be violent or to otherwise cause undue harm to themselves or to others.

If you or someone you know abuses Peyote, call 800-411-9312 (Who Answers?) toll-free for treatment information.