Hallucinogens are a group of drugs that alter a user’s perception of the world around them and of reality. Many cause auditory and visual hallucinations, where people either see reality distorted or even see entirely new images. They distort the perception of space and time for users, and have been known to cause synesthesia. Synesthesia is a perceptual mixing of sensations where people may ‘see’ scents or ‘feel’ colors.

Some of the most well-known hallucinogens are LSD (acid), psilocybin (magic mushrooms), peyote, and PCP. Though they are all considered illegal substances, people abuse these drugs for their psychedelic effects. Some people also use them, notably peyote, in religious ceremonies. Abuse of hallucinogens is dangerous as their effects are largely unpredictable and can be very traumatizing. Another reason that hallucinogens abuse is dangerous is that it is possible to grow tolerant to them, dependent on them, and in some cases develop a hallucinogen addiction. 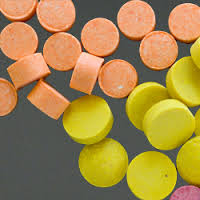 PCP is the most addictive hallucinogenic drug. It is found in several forms, including pills and powder.

Developing a tolerance to hallucinogens is dangerous. The National Institute on Drug Abuse warns that this is especially dangerous in LSD and hallucinogens in general because of the unpredictability of their effects.

Developing a dependence on a certain drug or type of drugs means that you feel that you need the drug to function, or at least that you see it as an important part of your life. Some people do develop a dependence on hallucinogens. This dependence is usually psychological, where a person will have a perceived need to take the drug and may experience anxiety when they cannot access the drug. On the other hand, in the case of PCP or ketamine the dependence can be physical, according to Better Health Australia. If a person stops taking either of these drugs after becoming dependent on them they will most likely experience withdrawal symptoms.

Though hallucinogens, especially LSD, are known to create tolerance in users, most are generally not considered to be addictive. This is the case for LSD, peyote, and psilocybin. According to the National Institute on Drug Abuse, LSD is not considered to be addictive because it does not produce compulsive drug-seeking behavior. The drug’s effects are so intense that people generally wait some time to take it after a particular time.

PCP, on the other hand, is an addictive drug. Repeated use of PCP leads to drug cravings and compulsive drug-seeking behavior. The Department of Justice also reports that PCP dependence is possible, and that the dependence is mostly psychological. Signs of PCP addiction include the psychological withdrawal symptoms of extreme depression and psychosis. PCP is a white crystalline powder that is readily soluble in water and that is injected, snorted, or ingested. PCP addiction treatment usually consists of inpatient, residential care that involves antidepressants and counseling.