PCP (Phencyclidine) is a synthetic hallucinogenic drug that is making a comeback across the nation as many variations of the drug are produced in mass quantities for sale on the street. In some are areas, it has a higher trafficking rate than crack cocaine. As widespread use of PCP grows, so does the number of people who become addicted to the luring, but, unpredictable, effects of the drug.

What Motivates People to Use PCP?

Hallucinogenic drugs have been used for centuries in spiritual rituals and medicine. The same psychoactive characteristics of separating self from reality, enhancing sensory perceptions, or inducing a state of peace and tranquility is mostly what motivates people to use PCP. Most people who use hallucinogens do not become addicted to them physically, but psychological or environmental factors can be influential in their continued use. PCP is different. Unlike some hallucinogens that come from plants and are occasionally abused, PCP is man made in clandestine labs that may add substances to enhance the effects while also increasing its potential for abuse and addiction. 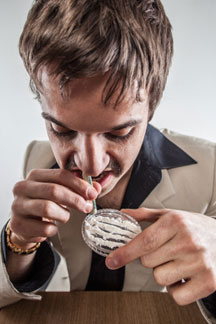 PCP use is dangerous and can lead to addiction.

There is no safety in using PCP. “PCP has been sold under the guise of a number of other drugs, including THC, methamphetamine, mescaline, and LSD.” according to the Center for Substance Abuse and Addiction Research. Because it is a potent psychedelic drug, the enormity of the effects becomes recognized when the person experiences a “bad trip” or when they begin to suffer the many psychological problems PCP abuse can cause. PCP changes the way the brain functions and with repeat or frequent changes, its use can lead to cravings or a compelling desire to use more. Addictions increase the potential for psychological health risks such as cognitive or memory impairments, compulsive drug seeking behaviors, and extreme psychosis or depression when not using or withdrawing from PCP.

PCP abusers often suffer from other co-occurring disorders such as bi polar disorder, anxiety, depression, alcoholism, or other substance abuse. The co-existence these disorders add to the complications that PCP abuse can cause when the brain becomes chemically imbalanced and the person prefers the state of mind altered by PCP.

PCP causes hallucinations, delusions, drastic mood swings, anxiety, paranoia, violent behaviors, suicidal tendencies, and other psychosis resembling schizophrenia. Users may feel powerful or “superhuman” and exhibit bizarre or irrational behaviors because they feel invulnerable to outside stimuli. A PCP user may go from a tranquil and extremely relaxed state to being extremely violent and unable to recognize pain. Withdrawals from PCP are associated with extreme depression, and psychosis which can lead to suicidal or other harmful tendencies to themselves or others.