Three of the mostly commonly heard about hallucinogens include LSD, psilocybin, and peyote. These commonly abused hallucinogens are all illegal and are considered very dangerous. They produce intense hallucinations and have long-lasting, unpredictable effects. Hallucinogens alter people’s perception and can make them act in very strange ways, ways that are sometimes harmful to themselves or others around them. There are other hallucinogenic drugs aside from these, as well.

One of the most powerful and potent mood-changing chemicals is LSD, or d-lysergic acid diethylamide. LSD is a Schedule I drug in the United States because of its high potential for abuse and lack of accepted medical use. Commonly known as acid, this hallucinogen is made from a lysergic acid compound found in ergot, which is a fungus that grows on grains such as rye.

The LSD high is often referred to as a ‘trip’ and it lasts for up to 12 hours. According to the Center for Substance Abuse Research these are some of the drug’s effects:

It has the potential to cause panic attacks, intense anxiety and paranoia, seizures, rapid heart rate, elevated blood pressure and more. Once taken, the effects of LSD are irreversible and the user has to wait for the drug to take its course to feel normal again. 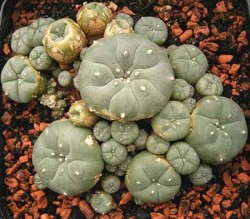 Peyote is a cactus plant that contains mescalin, the drug’s active ingredient.

Another of the more common hallucinogens is psilocybin. This drug is found in certain types of mushrooms which are indigenous to tropical and subtropical regions in South America, Mexico, and the United States, according to the National Institute on Drug Abuse. These mushrooms are usually referred to by their street names: magic mushrooms, shrooms, and boomers. Psilocybin is also on the Schedule I list of controlled substances for its addictive potential and lack of approved medical use.

Psilocybin produces effects similar to LSD, including heightened sensory perception, hallucinations, and altered perception of space and time. The biggest danger associated with magic mushrooms is that they are easily confused with poisonous mushrooms, which can be deadly. Other dangerous effects of taking shrooms include:

The effects are highly varied, but like LSD there is no way to make them stop once the mushrooms are ingested. Psilocybin lasts from 3 to 6 hours.

Peyote is a hallucinogen that is very commonly associated with religious ceremonies in northern Mexico and the southwestern United States. Peyote is actually a small, spineless cactus that contains mescaline, the active ingredient. Mescaline can be produced synthetically, as well. On the top of the peyote cactus there are disc-shaped buttons that are cut off and dried. These are then chewed or brewed in tea and ingested.

The peyote high lasts 12 hours, and involves intense hallucinations as well as deep states of introspection. It can cause nausea, vomiting, anxiety, paranoia, and emotional instability. Peyote raises blood pressure, heart rate, and breathing rate. It can also cause psychosis, and is especially worrisome for people with per-existing mental health disorders.