For centuries, hallucinogen plants have been used in religious practices, rituals, and medicines to precipitate “visions” or mystical experiences, spiritual transcendence and insight, or the detachment from reality. All over the world, hallucinogen plants continue to be used in the most primitive of natures to heal the mind, body, or soul. Some are legal and some are not.

In some hallucinogenic drugs, the psychoactive chemicals have been extracted from plant sources and used as precursors while others contain chemicals that are completely synthetic. In the United Sates, known and investigated hallucinogen chemicals are placed into five schedules under the Title 21 United States Code (USC) Controlled Substances Act (CSA) to be controlled by the DEA, “based upon the substance’s medical use, potential for abuse, and safety or dependence liability.”

What Are Hallucinogenic Drugs? 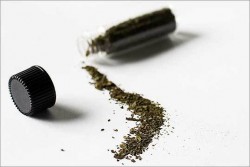 Salvia divinorum is an example of a hallucinogenic drug.

Some of the most commonly known hallucinogenic drugs are LSD, PCP, peyote or mescaline, psilocybin mushrooms (“magic mushrooms”), MDMA, DXM, salvia divinorum, and ketamine. Designer and synthetic hallucinogen drugs are being devised on a daily basis for recreational abuse including Ecstasy (originally MDMA, now containing a variety of hallucinogenic drugs in disguise), 25I (“Smiles” or NBOMe ), 2C, and DOM (STP).

As highly variable substances, the effects any hallucinogenic drug will have on one person to the next can vary dramatically. The curiosities, however, are never waning and the Center for Behavioral Health Statistics and Quality (CBHSQ) reported that on an average day during 2012, the number of young adults aged 18 to 25 who used hallucinogens were 46,179 and 1,561 were first time users.

Hallucinogens distort perceptions and reality. They alter thoughts, senses, emotions, consciousness, motor functions, and behaviors in a variety of ways by disrupting signal communications and functions in the brain. According to the NIDA ” When under the influence of either type of drug, people often report experiencing rapid, intense emotional swings and seeing images, hearing sounds, and feeling sensations that seem real but are not.”

There are three main hallucinogenic drug categories including:

The unpredictability in use and inconsistencies in potency keep most hallucinogenic drugs in Schedule I under the act having no currently acceptable medical purpose or safety in use with high potentials for abuse and dependence liability. This makes them illegal to manufacture, distribute, or posses for any purposes other than those allowed under the federal code.

According to the 2014 Nation Drug Threat Assessment, “Since 2009, US law enforcement officials have encountered more than 240 new synthetic compounds, including 99 synthetic cannabinoids, 52 synthetic cathinones, and 89 other compounds.” Some of these substances are compounds that have dangerous hallucinogenic effects, but, are unable to be regulated under the CSA because they are disguised to be used for other purposes or the chemical ingredients keep changing to keep them off the radars of law enforcement.

State legislatures are also involved in the legality issues of hallucinogen drugs and may enact laws concerning hallucinogenic drugs that are not currently being controlled under the CSA. For the most part, any hallucinogenic drug that becomes popularly abused in an area is subjected to investigations and controls via local law enforcement officials and state regulatory makers.

Some plants containing hallucinogenic properties are legal to possess and be used for religious practices or rituals in certain cultures such as peyote in Native Indian cultures. Some are legal to be grown for aesthetic purposes in landscaping such as angel trumpets or salvia divinorum. Salvia’s legality varies by state and the DEA views it as a drug of concern (although not regulated by the CSA) while others view it as a dangerous drug. According to the National Institute on Drug Abuse,” Because of the nature of the drug’s effects—brief hallucinogenic experiences that mimic psychosis – it is more likely to be used in individual experimentation than as a social or party drug.”

Hallucinogen drugs are once again being explored for therapeutic purposes and as research expands, a great amount of headway has been made in using hallucinogen drugs to treat depression, schizophrenia, bi-polar disorders, dementia, post traumatic stress disorders, obsessive compulsive disorders, certain addictions, pain, and other ailments. Hallucinogenic drugs used in palliative care practices can give a terminally ill patient relief from pain, anxiety, depression, and the fear of dying when other drugs are contradictory or unhelpful.

Using hallucinogenic drugs in psychological treatments for victims or assault, rape, domestic violence, or other tragedies is nothing new and hallucinogenic drugs like LSD and psilocybin mushrooms have remained legally available for those research purposes. These types of hallucinogenic drugs are showing more promises as they are used to treat the influx of post traumatic stress disorders in American veterans. Strict controls, however, are placed on these providers to prevent diversions and inappropriate use of the drugs.