Marijuana is one of the most popular drugs of choice that is counted by some as a safer alternative to other “hard core” drugs such as cocaine or heroin. It’s also been described as a “gateway” drug that leads to the abuse of other illicit drugs, but, according to the Center for Substance Abuse Research, “a majority of marijuana users studied (63%) did not go on to use other illicit drugs.”

Despite the endless controversy, marijuana users, growers, and the scientific, legal, and medical communities will all confirm that there are many strains of marijuana that have different levels of cannabinoids. Depending on which cannabinoid receptors these chemical compounds activate in the brain and spinal cord, using marijuana can produce stimulant, depressant, and hallucinogenic effects.

According to the most recent estimates of the National Survey on Drug Use and Health (NSDUH), in 2013, “Marijuana was the most commonly used illicit drug, with 19.8 million current users aged 12 or older (7.5 percent).” The dried flowers and surrounding leaves of the cannabis plant are typically smoked for recreational purposes eliciting senses of euphoria, mood elevations, relaxation, and pleasure. Marijuana also comes in the form of hashish or oil and can be infused into a great deal of products for edible ingestion.

Of the hundreds of compounds found in marijuana, 66 are categorized as cannabinoids and differentiated based on their degree of psychoactive capabilities and it’s mainly the THC contents of marijuana that produces the “high” recreational users look for.

With enhanced growing methods and improved technologies, the THC content in some marijuana sources is exponentially higher than several years ago and in any given plant portion these levels can change. This increases the potentials to develop tolerance and dependency as well as a higher risk of adverse psychoactive effects including hallucinations or other psychosis.

In addition to the growing number of recreational users, therapeutic users are growing as well as individuals are able to delineate the type of effects they desire from the marijuana and choose from a wide range of sources.

Some strains have more THC potency, the main psychoactive chemical, while others have more CBD potency that acts as an anti-psychotic countering the mind altering effects of the THC and has been proven beneficial in the reduction of seizures and for other therapeutic purposes.

Therapeutic users may be suffering from chronic pain, weight loss and nausea such as occurs in AIDs or cancer patients, insomnia, neurological disorders, or a number of psychological issues including post traumatic stress disorders, anxiety disorders, and depression.

According to the NIDA, “The highest density of cannabinoid receptors is found in parts of the brain that influence pleasure, memory, thinking, concentration, sensory and time perception, and coordinated movement.” The potentials for both adverse and beneficial effects of marijuana are astounding as science and research uncovers more ways that marijuana interacts with endogenous cannabinoid systems of the brain and central nervous system (CNS). 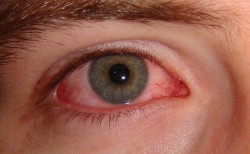 A common side effect of marijuana is bloodshot eyes.

The most common side effects of marijuana include:

Although the hallucinogenic effects of marijuana have been, for the most part, considered less than those of other hallucinogens such as PCP, LSD, and mescaline, there is certain degree of unpredictability in every marijuana experience. Marijuana can distort cognitive, emotional, and sensory perceptions in both pleasurable and negative ways and in basically, the same manner that other hallucinogen drugs do by over-stimulating the release of neurotransmitters and disrupting communications between nerve cells.

Hallucinations, paranoia, extreme anxiety, and delusions are possible with heavy marijuana use and since there is a marked ratio of high THC in today’s marijuana, these issues are becoming more common. Most people who use marijuana experience a tranquil and calming effect mixed with elevated moods and senses, but, a person who feels like they are out of touch with reality when they anticipated another effect can have a terrifying experience. Other individuals may display bizarre and unusual behaviors, become incoherent, or appear to be in a trance-like state .

Effects of Marijuana in Adolescent Use

Using marijuana at an early age not only limits cognitive development and impairs memory functions decreasing learning abilities and career opportunities for the future, but, increases the risk of developing behavioral and personality disorders, anxiety, depression, and long lasting social disparities such as dysfunctional relationships, low-income, or incarceration. Poor heath may be another complication when these individuals forsake exercise, indulge in unhealthy eating and sleeping behaviors, and lose interest in productive and healthy activities to engage in frequent marijuana use at this crucial time in their lives.