Hallucinogens are among the oldest known group of drugs that come from plants, organic substances, or synthetic chemicals that cause hallucinations, distort perceptions, and alter moods. The use of hallucinogens in religious ceremonies and for healing goes back to ancient times and for the same reasons they are able to alter brain and central nervous system functions, they are also popular for abuse.

Most hallucinogens are classified as Schedule I substances by the DEA because they have no currently acceptable medical use in the United States, they lack acceptable safety measures due to their unpredictable nature and variable effects in different individuals, and because there is a high potential for abuse.

With every dose, the individual risks unexpected harm during intoxication and the possibility of long term or permanent effects to their physical and mental health. 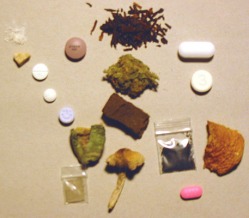 Psychedelic hallucinogens alter states of consciousness and cause distorted perceptions of sights, sounds, space, motion, time, objects, and sizes. They include lysergic acid (LSD), psilocybin (magic mushrooms), phencyclidine (PCP), and mescaline (peyote). In 2010, a designer drug, 25I, (25I-NBOMe), nicknamed “Smiles”, emerged as a recreational hallucinogen with up to 16 times more potency than other psychedelics and resembling LSD with the empathogen (emotional communion, empathy) effects of Ecstasy.

Dissociative hallucinogens cause the user to feel disconnected from reality and self. Like psychedelics, they can also distort perceptions of sights and sounds. The most common dissociatives are Ketamine, PCP, DXM, and Salvia.

You can count on hallucinogens having varying degrees of potency whether they come from natural sources or are synthetically made. Many hallucinogens contain neurotoxins and other chemicals that can add to their physical and psychological dangers. No two plants will have the same DNA and synthetic hallucinogens can be more problematic because they contain highly variable chemicals that are inconsistent and questionable to say the least.

Dose to dose, person to person, hallucinogens will have different effects and unpredictable consequences with every experience. There is no preconceived way of positively controlling what will actually happen because too many factors come into play including:

Hallucinogen abuse can harm your health by impairing your cognition. In many instances, the user loses their ability to make sensible judgments, inhibitions are lost, or they are unable to rationalize their thoughts. The inability to distinguish internal cognition from external cognition makes hallucinogen abusers extremely vulnerable to dangerous behaviors and external factors.

Some hallucinogens are known to cause memory loss and diminish cognition for several days or weeks. Just a single experience on a bad hallucinogen can cause long term neurological damages and some brain damages may be permanent. The Center for Behavioral Health Statistics and Quality (CBHSQ) reported that on an average day during 2012, the number of young adults aged 18 to 25 who used hallucinogens were 46,179 and 1,561 were first time users.

High doses of hallucinogens can cause negative experiences, known as “bad trips” where the abuser develops an intense fear, anxiety, panic, confusion, or rapid mood swings, and they may become combative or exhibit schizophrenic like behaviors that put themselves or others at risk.

The hallucinations can become so terrifying that the abuser may fear insanity or death and because the durations can last for 10 to 12 hours, suicidal or harmful behaviors may occur in those who are under duress or suffering depression.

Falls, accidents, rapes, and violent incidents are not uncommon when someone is intoxicated by hallucinogens. Some hallucinogens contain neurotoxins that can damage vital organs and cause debilitating physical impairments.

Hallucinogens such as Ecstasy, MDMA, and “Smiles” are commonly used in “raves” or all night dance clubs and these drugs cause elevated temperature, heart rate, blood pressure, seizures, and excessive sweating, which can lead to dehydration, hyperthermia, cardiac arrest, loss of consciousness, or sudden death.

In an effort to protect the safety of individuals using drugs from unknown sources, the non-profit organization, Dancesafe, issues reagent testing kits to help users identify the presence of certain substance in the pills they take. There are many drugs passed off as other drugs, however, and these testing kits can only return results for identifiable contents.

Hallucinogen abuse can harm your psychological health by disrupting the neurotransmitter, serotonin, and its functions in the brain and central nervous system. Serotonin helps to regulate moods and has both a direct and indirect influence on several major brain regions. With repeat use of hallucinogens, the depletion of serotonin can cause severe depression and other psychological disorders that may be difficult to overcome.

Psychological harms can be short term or have long term and possibly permanent implications including: