As stated by CESAR, LSD “does not produce compulsive drug-seeking behavior that is typical of addictive drugs, such as crack and heroin.” For this reason, it is not considered to be addictive in the same way other drugs are. However, just because it is not an addictive substance does not mean it is safe to abuse.

Like most hallucinogenic drugs (except for PCP and a few others), LSD is not addictive. It does not cause individuals to seek out further use to their own detriment, and it does not cause the brain to feel the need to continue abusing the drug constantly. But, like most hallucinogenic drugs, LSD does cause a very intense tolerance syndrome when abused.

This occurs because the brain becomes accustomed to the effects caused by LSD rather quickly. In fact, “tolerance develops so quickly that repeated ingestion is useless.” Because the compulsive need for repeated abuse is another way that most drugs (like crack and methamphetamine) cause addiction, LSD is not considered addictive. For most drugs, tolerance is part of its addiction syndrome, but in the case of LSD, this side effect actually helps most users avoid addiction to the drug.

The Effects of LSD 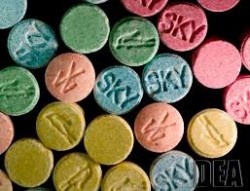 Although LSD is not addictive, it can have strong side effects.

In addition, the effects caused by the use of LSD do not lend themselves to consistent use and, therefore, to addiction. “The powerful hallucinations produced by [the drug] will often prompt users to abstain from use in order to recover and reorient.” This is because it can be extremely difficult and even undesirable to feel the intense effects of LSD all the time, causing users to go longer stretches of time between abuses than they would with other drugs. Also, the drug can cause extreme adverse reactions (bad trips) that lead to

For these reasons, LSD is not a drug that users will take lightly or even often. Once a bad trip has been experienced, it can often last with a person their entire life, which may even cause them to stop abusing LSD altogether. But it certainly helps them avoid the issue of consistent abuse, which is necessary to the formation of addiction. However, according to the NIDA, “LSD users can also experience flashbacks, or recurrences of certain aspects of the drug experience.” These occur “suddenly, often without warning, and may do so within a few days or more than a year after LSD use.”

Non-Addictive Does Not Mean Safe

LSD is a non-addictive drug, a fact that is caused by many of the issues listed above. However, just because the drug does not cause addictive behavior does not mean it is safe to abuse. LSD can cause many dangerous, even deadly, side effects that users have no way of predicting or preventing completely. That is why it is still a schedule I substance under the Controlled Substances Act.