Mescaline, a hallucinogenic substance derived from plants, produces “out-of-body” experiences or “trips,” any one of which can be pleasurable or disturbing. Certain types of meditation practices and therapy approaches also employ mescaline as a catalytic agent.

Mescaline interacts with the brain’s cognitive and emotion-based centers, oftentimes placing users in vulnerable and even helpless states of mind. With frequent drug use, the long term effects of mescaline can severely compromise a person’s psychological well being. 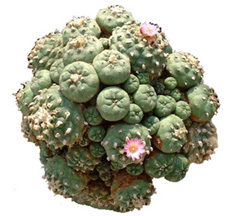 Mescaline is found within the nodules of Peyote plants.

Mescaline exists in nature inside the button-sized nodules of the Peyote cactus and Fabaceae bean, as well as in synthetically formulated drugs. As a synthetic drug, mescaline appears as a white, crystallized material known as mescaline sulfate.

While Schedule I class drugs are considered illegal under federal law, the traditional use of mescaline in Native American ritual ceremonies has allowed for an exception for members of the Native American Church.

In general, hallucinogen drugs carry a low potential for physical dependency; however, frequent and ongoing use places users at increased risk of dependency. Physical dependency develops out of the long term effects of mescaline on brain chemical functions.

With each dose, mescaline sets off a series of chemical reactions, releasing copious amounts of neurotransmitter chemicals throughout the brain and central nervous system. Dosage amounts ingested, length of time using and frequency of use all factor into how quickly a person becomes dependent on the drug.

Once physical dependency sets in, users start experiencing withdrawal effects as the brain’s tolerance levels continue to rise. In effect, withdrawal effects reflect the overall state of chemical imbalance present in the brain. With continued drug use, a full-blown addiction will soon develop.

For chronic drug users, the long term effects of mescaline can cause a medical condition known as Hallucinogen Persisting Perception Disorder or HPPD to develop over time. According to Columbia Health, people affected by HPPD experience continuous flashbacks of previous drug “trips.”

Flashbacks can happen at any given time, which greatly hampers a person’s ability to function in daily life. HPPD symptoms can persist for years after a person stops mescaline use.