When you see, hear, feel, or taste something that is not real, the sensation is called a hallucination. Some drug users want to experience this effect and take substances that cause these hallucinations. These substances are hallucinogens. Although most hallucinogens are not deadly if you use them frequently, they can lead to psychotic breaks, psychosis, and other severe mental illnesses. Here are some common examples of hallucinogens.

D-lysergic acid diethylamide, more commonly known as LSD, is a very commonly abused hallucinogen. However, it has a very real risk of significant psychiatric side effects, particularly in people that use it frequently or in large doses. One particular side effect, flashbacks, are known to occur years after use of the drug has stopped.

Two of the most popular party drugs, ecstasy and molly, both contain the active ingredient MDMA. MDMA acts as both a hallucinogen and a stimulant, which is the source of its popularity. However, it is also the source of its greatest danger. Many users of MDMA are severely injured or killed by extreme body temperature increases and dehydration. 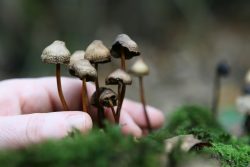 Psilocybin is a hallucinogenic ingredient found in certain mushrooms.

According to the National Institute on Drug Abuse, PCP is a powerful and dangerous dissociative. It has been around since the 1950s and is has an extreme reputation for causing violent hallucinations and episodes. It is one of the more dangerous of the hallucinogens because of the violence associated with it.

Psilocybin is an ingredient in a specific type of mushroom that grows in certain parts of the American continents. These mushrooms are easy to find in cattle pastures but if you take the wrong one, it can have deadly consequences. If you believe that you may be addicted to psilocybin, or any other hallucinogen, call 800-592-1193 (Who Answers?) for help today.

Dextromethorphan, or DXM, is a cough suppressant found in many over-the-counter cold medicines. When taken in high doses, or combined with alcohol, it produces hallucinogenic effects. However, it also has depressant effects that can stop the heart or breathing and lead to death. This is especially pronounced when it s combined with alcohol.

Also known as Special K, ketamine is a dissociative that is usually used in anesthesia for animals and humans. It is very dosage oriented, making the risk of overdose and death very likely. Users often have severe side effects including urinary incontinence, impotence, and permanent psychotic states.

Peyote is a  cactus native to parts of Mexico and the southwest United States that has long been a popular hallucinogen of abuse. According to Medscape, peyote has long been used by Mexican Indians for religious ceremonies.

The fact that it is a naturally occurring plant that has been used for thousands of years does not make it safer. Like many other hallucinogens, peyote use increases the risk of psychosis, mental illness, and accidental injury or death.

If you find yourself using hallucinogens frequently or believe that you are addicted to them, it is important to seek treatment as soon as possible. To find a comprehensive treatment program, all you have to do is call 800-592-1193 (Who Answers?) . We can help.